Much of the “traditional” roles that women are meant to play come from 1940’s-1960’s television shows. The ideal housewife who cooks, cleans, raises well behaved children and pleases her husband no matter what- all while keeping a pretty, neat appearance-comes from shows like I Love Lucy, The Honeymooners and Leave it to Beaver. These shows defined the roles of men and women of the time, and still have a lasting impression to this day. Perhaps as a post-war effort to assure their power and authority back in the homes, women’s roles in these shows were often second to the man. The husband/father figure is who made the decisions, judged and scolded the wife, and were the “moral fiber” of the program (Zeisler, p. 36). Women’s roles were limited, and they were often forced back into the kitchen- even though they were asked to leave their homes during the war in order to work and help the war effort. Once the men came home they were all expected to resume their “usual” positions. Women were apparently only needed outside the home when the men were away. After the war, TV shows portrayed them as love struck fools or vulnerable victims (Zeisler, pp. 30-35). While the perfect housewife was being portrayed on TV and women were made to feel inadequate compared to Mrs. Cleaver, the reality of that time was that more women were working outside the home than ever before, and divorce rates doubled after the war (Zeisler, p. 37). This makes one think: did the perfect, traditional family ever even exist?

The 1960’s was a time of slight female rebellion, which was, of course, frightening and met with plenty of opposition. Male rebellion was normal and natural though, and the term “boys will be boys!” was coined. (Zeisler, p. 42). Freedom versus femininity was first introduced by TV shows such as Bewitched and I Dream of Jeannie which showed strong, female leads, as well as by singing girl groups like the Shirelles, the Shangri-Las and the Ronettes. These women often sang about dark issues, such as an abusive boyfriend or being used by a man. Through their images and songs, many women found their own voices. This may have “planted a little seed of social movement “ in that time (Zeisler, pp. 43-44.)

Before seeing a real change in how women and girls were being portrayed and treated, however, there were many businesses just starting to aim their advertisements as women. An example of this was in the late 60’s, when Virginia Slims was the first cigarette company to make an ad directly aimed at women (Zeisler, p. 57). With second wave feminism hitting Hollywood, and groups like NOW (National Organization for Women) fighting against things like the Miss America Pageant and oppressive and sexist ads, advertisers starting using feminism in their ads to target the “modern woman” and still sell products. And women bought it! Outraged, feminist groups continued to boycott products and picket events that objectified and sexualized women and young girls. This, of course, led to extensive media coverage which was biased and condescending. The media created a discourse that feminism (or “women libers”) were brash, not feminine, and overall unlikeable. The media focused more on the women’s images than the issues they were fighting for. News coverage aimed to “undermine the spirit” of these events, and the reports were dismissive and often “wrote around” the issues (Zeisler, pp. 60-61) 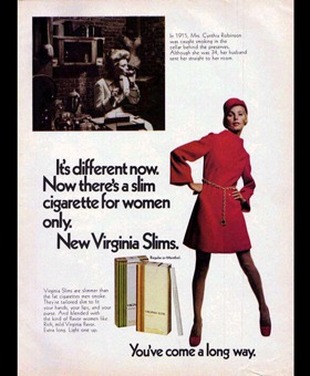