“We were hard and proud of it, and it hadn’t been easy to get to this point- this place of complete independence, where we had the luxury of treating men like sex objects. It had taken hard work, loneliness, and the realization that, since there might never be anyone there for you, you had to take care of yourself in every sense of the word.”- Candace Bushnell, Sex in the City author

one step forward, two steps back? 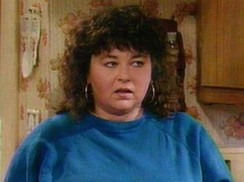 Unfortunately, the late 80’s and into the 90’s turned into a very hostile time for feminism. The 1987 film Fatal Attraction, for example, was a cautionary tale about getting involved with a single, liberated woman. Being a feminist was a “threat to the status quo”, the housewife and the traditional family (Zeisler, p. 89-90). Shows like Roseanne tried to show women as both working woman and mother. Roseanne was real and flawed; overworked by her job and underappreciated by her family. The show portrayed the idea of the “second shift”; a term coined by Arlie Hochschild to mean “the situation faced by working women” who work at a job all day and come home to “continue working on the domestic front” (Zeisler, p. 91). Roseanne refused to hide the reality than many women were facing and living everyday. Not everyone wanted to hear from a boisterous, overweight woman about the troubles of middle-class life, however, and Roseanne herself was criticised and called a “dog” and a “bitch” by male viewers, and the actress often fought with the shows creators to keep the character real and authentic (Zeisler, p. 91).

During the 90's, a lot female singers came out with powerful and reactive music. Salt-N-Pepa used hit after hit to talk about women’s sexual agency, including “Let’s Talk About Sex” and “Shoop.” (Zeisler, p. 105) Buffalonian Ani DeFranco wrote songs about “battling street harassment, embracing sisterhood, and negotiating sexual desire in a sexist world.” (Zeisler, pp. 105-106). There was also the emergence of a concept known as Riot Grrrl, which was a direct descendent of the radical feminism of the late 60’s and early 70’s. It was conscious raising and came in the form of music and magazines that aimed to show the anger and frustration young girls were feeling. They wrote about personal issues including abuse and rape, embraced the power of girlhood, and refused to conform (Zeisler, p. 106). Unfortunately, since many Riot Grrrls refused to talk to the mainstream media and all their work was independent, stories featuring them were not always true and the media had free reign to spin inaccurate, “off-base characteristics of the movement” (Zeisler, 107). In a total twist of irony, it wasn’t long until the initial “girl power” ideals of the Riot Grrrls was repackaged in the form of the British pop group, the Spice Girls (Zeisler, p. 107). Although the message may have had good intentions, it was being sold by young women sporting push-up bras and hot pants. The whole idea was packaged in bright colors, “peppy” patterns, hair dye and nail polish (Zeisler, pp. 107-108). This message may have been helpful for young girls who believe in themselves and their own potential much more than adolescent girls and young women do. Girls’ self-esteem tends to plummet once they hit puberty (Zeisler, p. 109). However this form of marketing takes feminism on as something cute and fun, altogether ignoring the larger issues and not taking it very seriously. When this happens it makes something look like a “fad” instead of a social movement and way of life.

Many female artists also banded together in the form of Lilith Fair, organized in 1997 by Canadian musician Sarah McLachlan, as a way to “redefine women’s music away from easy labels” (Zeisler, p. 110). By creating their own space, “these women made female voices their priority” (Zeisler, p. 111). They “elbowed their way into a space despite being told it couldn’t be done” (Zeisler, p. 110). It consisted of some Billboard artists including Tracy Chapman, the Indigo Girls, Jewel and Paula Cole, along with some singers that were too controversial outside of the festival to become mainstream. One unique aspects of the music and main message was that it was often political and talked about the lesbian identity and lesbian separatism, and it also donated proceeds to various causes including Planned Parenthood, the Breast Cancer Fund and RAINN (Rape, Abuse, and Incest National Network) (Zeisler, p. 111) . The Lilith Fair was a kind of a bridge between women’s music and the mainstream, but unfortunately it was lacking some of the toughness needed to last more than a couple years (Zeisler, p. 112). After that there was an obvious “hole” that was filled with “macho” guy groups like Limp Bizkit, Korn, and Blink 182, while the real meaning of “girl power” slipped further and further into the background of pop culture (Zeisler, pp. 112-113).

Despite the political climate and backlash from the women’s movement, TV and film continued to see a rise of female leads in the 90’s. Murphy Brown was a controversial television character who was single and successful (much like Mary Tyler Moore) and showed women that work can be satisfying, ladies don’t always have to compete with each other and can actually learn from one another, and women and men can be friends without “sexual tension or rank sexism.” The show caused quite the outcry when the story line involved her choosing to mother a child on her own (Zeisler, pp. 92-93). The Golden Girls showed viewers that life didn’t end with marriage, kids, and menopause, and other shows chose to have strong females on the front lines, including Ellen, ER, Law & Order, and The X-Files (Zeisler, pp. 94-95).
In 1998 a whole new female cast was introduced, and they showed that you do not need to rely on a man for happiness or economic dependence, and sometimes all a girl needs is a good group of friends to rely on. Much like The Golden Girls did years before, Sex in the City showed a lead of female characters, each embodying aspects and personalities of everyday women. You had the one that slept around, the hopeless romantic, the cold, bitter one, and the one who couldn’t stop questioning it all. There were also groups like Destiny’s Child singing songs about being financially independent, women like Oprah dominating magazine covers with headlines about her net worth and overall power and influence, women owning their own businesses in record numbers, and matching men in college admissions and earning potential (Zeisler, pp. 100-101). 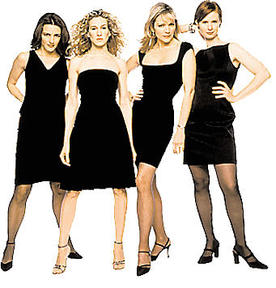 Sex in the City

The new millenium came and went, and women were still fighting a variety of battles, much of them brought on by a new type of television. “Reality” TV was everywhere all of a sudden, and the main premise of a lot of these shows involved meeting the man of your dreams (Who Wants to Marry a Multimillionaire, The Bachelor, Joe Millionaire, Temptation Island). The women were usually white, in their early 20’s, and void of any real personality (Zeisler, p. 126). They stereotypically portray the idea that all women want in life is to be loved, and they are not worth anything without a man to validate them. They show that only thin, beautiful women will find a man who will provide her with financial security, and there is no need to be independent. These shows are sexist, show rigid gender norms, and are usually consumed by young women. One would think that at this time, portrayals of women would be more complex, developed and diverse. There are some strong female leads in popular shows such as Law & Order, CSI, Bones, The Wire, ER, House, The Sopranos and Six Feet Under. The problem is that reality TV is so cheap to make and attractive to viewers, so they often outnumber scripted shows on many networks (Zeisler, p. 127).

Then there are the shows featuring makeovers whose primary plot is basically “You’re not attractive enough so let us help you.” Shows including Extreme Makeover, The Swan, and What Not to Wear claim to be “liberating and therapeutic for women” (Zeisler, p. 129). In reality, these shows told viewers (and their contestants) that they cannot be happy in their lives, jobs, relationships, etc. until they fix how they look and become more beautiful. Improving one’s appearance or going on a strict diet in order to lose weight and be more healthy is, of course, a woman’s choice. But that word, “choice” is so complex. Are we really given the choice, or are we just a product of our surroundings? Is “choice” a shorthand for “feminism”? (Zeisler, p. 132)

“Raunch” and “do me” feminism also emerged during this time. These new ideas were to prove that being a feminist did not mean that women were man haters or didn’t enjoy sex. On the contrary, these women showed that sex was enjoyable and fun, and they often showed this by using performances and their own versions of porn. The main message was that by “performing sex work - that is, knowingly enacting what was expected of a stripper or other sex worker- women were in fact reclaiming sexuality that had been the property of men and using it for themselves...They were taking back that male gaze and making money off it to boot” (Zeisler, p. 136). The main problem here is that many women admit to feeling empowered by the money they make, not necessarily the work they do (Zeisler, p. 137). Another issue is whether or not the messages these women are sending are healthy for young girls and women; do we really want to tell them to be hypersexual in order to feel empowered? If they are using men merely for sex, aren’t they doing exactly what we are fighting against? Telling women they should objectify themselves seems counter productive to feminism. The question of “choice” comes back into play here as well- what about women who didn’t “choose” the sex industry as a means of survival? I’m sure the work they were doing was not much fun for them. And were the college students on Girls Gone Wild entering wet tee-shirt contests and making out with each other in bars on their own accord, or because “boys like it” (Zeisler, p. 138). “Liking sex and performing sex are two different things...If we’re going to have sexual role models, it should be the women who enjoy sex the most, not the women who get paid the most to enact it” (Zeisler, p. 138). 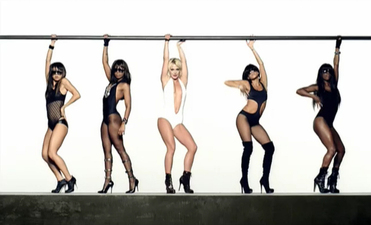 There is a difference between "owning" and "flaunting" your sexuality!

a new kind of feminism?

J, Jack Halberstam tells us in his 2012 book Gaga Feminism: Sex, Gender, and the End of Normal that these days our rebel feminist role model is Lady Gaga, who shows us that being a little crazy at times can be fun and empowering, as long as we are doing it to get people’s attention in order to teach valuable lessons. Whether it’s questioning gender norms, or standing up for equal rights, the idea of “going gaga” is about fighting back, accepting change and transformation, being modern, outrageous and bold. He says that “Gaga feminists want to uncover bigger political prizes than splendid individualism” (p. 141).