So...what does this all mean??

Advertising can even have an effect on people’s relationships. “Sometimes advertisers tell us we’ll find true love and commitment with the products. Other times we’ll apparently settle for great sex. For decades products have been advertised as the route to passionate love making” (Kilbourne, p. 87). We are told that we need to compete with our lovers’ possessions, or consume certain products to even have a lover to begin with. Relationships are being constantly trivialized in the popular culture, and people are using the romantic scripts in these ads in their real lives. At a time when most of us yearn for better communication and deeper relationships, men are being encouraged to be distant, strong and silent and women are being told to act mysterious (Kilbourne, p. 92) Ads often play upon our ideas of self-worth, and this corruption of relationships in advertising is taking place at a time when the divorce rate is soaring and the rate of domestic violence is still far too high. Advertising is not to blame for these problems, but is a part of this “cultural climate that discourages successful, long-term relationships” (Kilbourne, p. 93).

Studies show that women are more dissatisfied with their bodies than men, and that difference is on the rise. Women are more concerned with and invested in their physical appearance than men, and this lasts over their lifetime (Crawford, 213). Beauty advertisements that are aimed at women may lower self-esteem and body image, and being exposed to these images may has negative effects on women’s body satisfaction (Crawford, p. 215). Over time, women tend to internalize these messages and start to engage in habitual body monitoring. They often feel fear, shame and anxiety for not being attractive enough. When we experience shame, our thoughts turn inward and our social skill suffer (Crawford, p. 218). This can have very damaging effects on girls’ and women’s performance at school, work, and in their social lives. Look at the language these ads are using to sell these products- girls and women are constantly being told to “conceal” their blemishes and dark spots, “tame” their hair, “watch” their weight, “control” their tummies, and “fight” their fat (Crawford, p. 220). No wonder so many women feel uncomfortable in their own skin and engage in beauty rituals that are actually self-destructive. Women will smoke (to curb their appetites) and go tanning, despite the harmful health effects, and succomb to other forms of torture, like ripping and plucking off body hairs and using  carcinogenic chemicals to dye their hair (Crawford, p. 220). Crawford (p. 233) says that “Women’s objectification is so common because it is profitable.”


Perhaps a striking example of how the media can affect women is a study that was done in Fiji that found a sharp rise in
eating disorders among young women soon after the introduction of television to their culture. Before TV was available, there was little talk of eating disorders, and being too thin was a sign of a problem. In 1995, television came to the island, and within three years the number of teenagers at risk for eating disorders more than doubled, 74 percent of the girls said they felt “too big or too fat”, and 62 percent said they had dieted in the past month. It seems quite coincidental that these girls were 50 percent more likely to describe themselves as fat and 30 percen more likely to diet after being exposed to television, compared to those who watched TV less frequently (Kilbourne, p. 135).

Adolescent girls are especially vulnerable to the obsession with thinness because of pressure from family and peers to not be too “big”, and the obsession starts early. Some studies have found that 40 to 80 percent of fourth grade girls are dieting. Today at least one-third of twelve-to thirteen-year-old-girls are actively trying to use weight by dieting,vomiting, using laxatives or taking diet pills. One survey found that 63 percent
of high school girls were on diets, compared to only 16 percent of men. And one survey in Massachusetts found that the single largest group of
high-school students considering or attempting suicide are girls who feel they are overweight (Kilbourne, p. 134). There is no doubt that media images certainly contribute to the “body-hatred” so many young women feel and this can lead to unhealthy habits. Advertising does promote the abuse of eating, drinking, smoking, and thinness (Kilbourne, p. 135).

At the same time than women and girls are being told to be physically small, they are also taught to make their presence tiny as well. Girls are often made to feel silenced and taught that they should be quiet, well behaved, and not make a fuss. “Make a statement without saying a word” and “More than word can say” are ads for two different perfumes (Kilbourne, p. 138). This “beautiful but silent” ideal is not only seen by girls, but by their parents, teachers, and male counterparts. This means that everyone is exposed to these “ideals” that girls and women should adhere to, and can influence everyone’s sense of how girls should be. This can affect girls in school- a 1999 study in Michigan showed that even though boys are louder and more disruptive than girls, girls are the ones being told to be quiet, speak softly, or use “nicer” voices about three times more likely than boys are. “Girls were encouraged to be quiet, small, and physically constrained.” This can lead to girls growing into women who are “afraid to speak up for themselves or to use their voices to protect themselves from a variety of dangers” (Kilbourne, p. 139). The January 1998 cover of Seventeen highlights an article, “Do you talk too much?” while the back cover was for a mascara which promoted “high voltage volume instantly!” (Kilbourne, p. 140). This teaches girls can express themselves through body language and using various products, rather than actually using words and being themselves. Luckily, women can always turn to the knife if they are dissatisfied with their appearance! We are told that we can have a smaller nose, more defined cheekbones, or get rid of that “excess body fat” with the help of plastic surgery (Coward, 1985). These beauty rituals in the West want women to resemble pre-pubescent adolescents; skinny, hairless, and powerless (Coward, 1985). 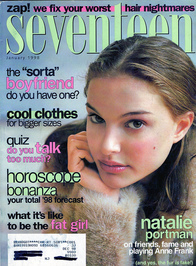 The 1998 cover of Seventeen magazine that asked girls "Do you talk too much?"

There are many contradictions out there for young girls and women who are trying to figure out themselves and the world around them. Some aren’t taught adequate sex ed, yet are surrounded by what sex and love is in the media. Girls and women are portrayed as being sexy and available to men, yet are also taught that they should be passive and well-behaved. On one hand, we can’t be too sexual. But men won’t want us if we’re prude, either. This is going back to the idea of passive female/ active male, and that women are to be viewed and used by men. Women are only desirable, however, if they are young and beautiful, and sexual desire in ads is almost entirely heterosexist. This means that not all women are being accurately portrayed in their own culture, and there are not many options for women and girls who want to break free of these gender norms.

Right now our society is still struggling with empowering women and not making them sexual objects. We also have to do a better job representing women of color, lesbian women, older women and disabled women. Many advertisements still objectify and sexualize women, especially those that don’t show women’s faces or slice women up into body parts and literally turn them into objects. Most of the ads we see now that target a female audience “unabashedly use a combination of shame and sex appeal for their pitches” (Zeisler, p. 141). They also use editing programs like Photoshop to make their models look flawless and perfect. They’re basically sending the message “Buy our product and you can try to look better, but you will never quite look like this because it’s all fake anyway.” They are just images, not reflections of what is real (Zeisler, p. 141). Dr. Kilbourne explains that advertising makes us feel that we can re-create ourselves and transform ourselves. If we buy the right product or read the right magazine we can “transcend our circumstances” (p. 68) What effect can this have on young consumers? Dr. Kilbourne warns that many teens “fantasize that objects will somehow transform their lives, give them social standing and respect” When they wear a certain brand they feel, “This is important, therefore I am important.” The brand gives them a type of status (p. 70). Advertisers are well aware of their role and do not hesitate to take advantage of the “insecurities and anxieties of young people, usually in the guise of offering solutions.” For example, designer clothes could equal status, a cigarette could  equal independence. Certain products could even prove masculinity or femininity (Kilbourne, p. 129).