starting to see some progress... 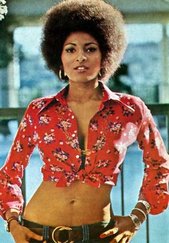 Foxy Brown
Despite the negative portrayals in the media, however, the movement saw a growth in NOW membership and women writers and publishers were emerging everywhere (Zeisler, p. 64). Ms. magazine was introduced in the early 70’s by Gloria Steinem and featured feminist superhero Wonder Woman on the cover (Zeisler, p. 65). It was a revolution of it’s time and helped bring the women’s movement into the mainstream and into women’s homes. Unfortunately, Hollywood was moving in a different direction after the Hays Code was lifted in the 1970’s (The Hays code was something implemented in the 1930’s that banned movies from showing violence, sexuality and nudity; Zeisler, p. 29). Since directors were mostly male, women were often portrayed as wives, girlfriends and prostitutes, if they appeared at all (Zeisler, pp. 67-68). Some films did choose to show the female as the victim then avenger, however. These were known as “vengeance films” or “blaxploitation” (films like Coffy and Foxy Brown fit into this category). But instead of having a women go from victim to hero to show feminism, why don’t we stop making women the victims to begin with? (Zeisler, pp. 73-74).

Thankfully, the 1980’s moved into a time when women could move into leading roles and laugh at gender norms and sexism. An “only if we bind together can we change the system” type of attitude emerged. This happened when terms like “sexual harassment” were first being coined, and personal issues became public, political ones. TV guide even criticized television shows and commercials for not showing women as diverse, well developed characters (Zeisler, pp. 74-75). We did see some strong female leads however, including Mary Tyler Moore who was the first female character in history to whose primary relationships were with her career, friends, and co-workers. Maude, starring Bea Arthur, was a character who didn’t care much for social graces, and didn’t mind standing up to male chauvinism. Loud, brash, and kind of butch, Maude was everything that people feared about feminism. Nevertheless the show was a success, and hosted a variety of controversial topics, including racism, birth control, divorce, depression, alcoholism, and even abortion (Zesler, pp. 76-77). Even though this may not be shocking to an audience in 2012, at the time these topics were not talked about, especially on a sitcom show. It finally brought women to the forefront and and showed that these personal issues are widespread and complicated. Of course, some shows chose to laugh at feminism, and show that women are “not really oppressed”. Episodes of All in the Family and Green Acres showed characters getting swept up in the women’s movement, look ridiculous in their efforts, all to realize that “they didn’t have it so bad afterall!” (Zeisler, p. 77).    Cher

The introduction of MTV in the 80’s also offered some solace for women, only to have sexualization be favored over empowerment as time went on. The first images of some singers like David Bowie, Duran Duran, Prince and Annie Lennox showed extensive “heteroflexibility” (Zeisler, p. 84). Strong women like Cher, Pat Benatar and Tina Turner came on the screen and sang about women’s issues and dilemmas. Madonna is an excellent example of challenging the male gaze and using her videos to send a message (Zeisler, pp. 85-87). Unfortunately, it didn’t take long for MTV to catch up to the “sex sells” idea during the Madonna days and use women as backup dancers and “sexual ornaments” (Zeisler, p. 85.) “This ‘sex sells’ idea is a cliche attributed to advertisers who insist on using bodies to sell everything, even when the product has nothing to do with bodies” (Crawford, p. 209). And we still see this portrayal today in many R&B and rap music videos.